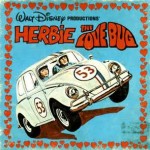 Herbie the Love Bug, is the first in a series of comedy films made by Walt Disney Productions that starred a pearl-white, fabric-sunroofed 1963 Volkswagen racing Beetle named Herbie with a mind of his own. Family fun with this classic film!

Tickets $5 at the door