The Circus of Terror

By Luke Davidson and Jonathan Horn

This new farcical, musical whodunit is set during late 1929 on the site of a run-down circus in desperate need of financial assistance. The circus performers encounter numerous obstacles that prevent them from putting on a show — including a mysterious killer who is murdering the circus’ main acts. Mystery, music and comedy combine for an evening of home-grown entertainment.

Davidson approached Z-Theatre last summer with the idea of staging “Circus” at the State Theatre. As a cast member of the wildly successful 2012 production of Forever Plaid at the State Theatre, he knew it was the perfect venue for “Circus.” The show had made its debut on the Perpich Center stage just months before while Davidson was a student at the Perpich Arts High School in Golden Valley, MN. Both script and score were tweaked and polished during the preparation for the Perpich performance. Eventually what began as a just-for-fun endeavor in early 2012 became a real production in 2013. However, many local people were unable to attend the Perpich performance and both men were eager to showcase their work locally. Z-Theatre quickly recognized this as a perfect opportunity to promote local talent and agreed to financially sponsor the production. Davidson and Horn have taken on the lion’s share of all production details, with Z-Theatre providing assistance when requested. The pair commented, “We’d like to thank everyone involved in making this production possible.  It’s not every day two young playwrights from rural Minnesota get a chance to direct their own work on a real stage with a team of people just as excited as we are!”

Coincidentally, opening night of “The Circus of Terror” falls almost exactly on the 86th anniversary of the Ringling Brothers-Barnum and Bailey Circus train derailment in Zumbrota on August 12, 1928. That incident occurred in the early morning hours of a Sunday. Thousands of people came to the area to witness the spectacle, which included zebras, albino horses and other exotic animals grazing in the pastures of Zumbrota. When the restaurants in town ran out of food, local residents pitched in and supplied meals at the Armory for the stranded travelers. The State Theatre played host to the circus people, filling up twice for a showing of, ironically, a film called “Circus.” Of course, seating accommodations had to be made as the audience included the world’s tallest man, midgets, and the world’s fattest woman, Alice from Dallas, billed at 683 pounds. The circus later proclaimed that Zumbrota showed hospitality beyond anything they had ever experienced.

Jonathan Horn (Kenyon) wrote the music for the show.  Jonathan is currently studying at University of Northwestern—St. Paul as a double major in Music Composition and Theatre.  He has written several compositions for piano, as well as a few other instruments.  Luke Davidson (Wanamingo) is studying at Ithaca College in Ithaca, NY as a Musical Theatre major.  He has written screenplays for a few short films, such as Crazy About Macy directed by Adam Jacobs.  Crazy About Macy won “Best Narrative” and “Best of the Festival” at the EDU Film Festival in Minneapolis, MN.

This production is made possible in part by the voters of Minnesota through a grant from the Southeastern Minnesota Arts Council thanks to a legislative appropriation from the arts and cultural heritage fund. 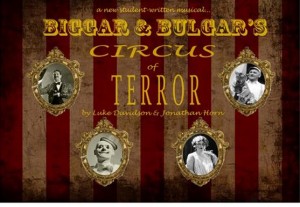 "The Circus of Terror" is an original musical-comedy-murder-mystery written by Luke Davidson and Jonathan Horn. First produced at Perpich Center for the Arts High School last May, the show has been revised and revamped for it's State Theatre debut this August. 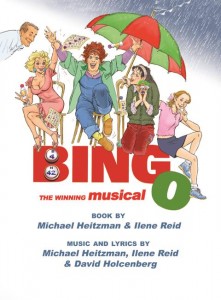 “Bingo! The Winning Musical” is an off-Broadway piece of musical theatre based on grandma’s favorite form of gambling. In between the number calling, strange rituals and fierce competitions, love blossoms and long lost friends reunite.

The cast includes six females ages 20-60 and one adult male, all singing roles. Auditions will involve singing; participants are asked to bring a prepared song and sheet music for the accompanist or may bring their own accompanist.

Community volunteers are appreciated in any aspect of the production, including set construction, costuming, stage crew, publicity, ticket sales and ushers.

The musical is presented by Z-Theatre and the Zumbrota Area Arts Council (ZAAC) by special arrangement with Samuel French, Inc.

For more information on auditions or volunteering, email statetheatre@zaac.org or call 507-732-5210.

More info about the show on the Samuel French website.
The State Theatre is located at 96 E. 4th St in Zumbrota. 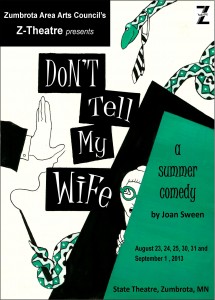 Set in an exotic themed hotel room, the action includes mistaken identities, disguises, frantic exits, hiding in closets, dives off the balcony, and extreme makeovers. Suitable for ages 13 and up.

Tickets available in Zumbrota at Busby Hardware, Crossings at Carnegie, Main Street Pharmacy and at the door.

Adults: $10 in advance, $12 at the door
Students 18 and under: $8
Showtimes:
7 pm August 23, 24, 25, 30, 31
2 pm September 1
*Meet and greet with the playwright after the August 25 performance!
DON'T TELL MY WIFE is a hotel-room farce. The action includes mistaken identities, disguises, people in closets, frantic exits, and dives off balconies.  Also two inept ladies of the evening and a 25-foot snake. Set in the theme room of a convention hotel, "Domina" and "Kitten," actually Ann Olsen and Shirley Peterson, pose as professionals in the "personal entertainment industry" in order to meet an unknown investor and open a bakery in Mason City, Iowa. Tool company executives, glamour makeovers and Girl Scout troop leaders get tossed in the mix for an evening of hilarious fun! 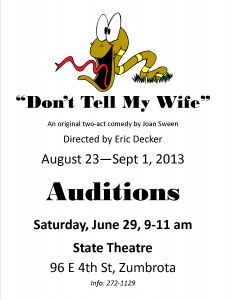 ABOUT THE SHOW
DON'T TELL MY WIFE is a hotel-room farce suitable for community theatres.  The action includes mistaken identities, disguises, people in closets, frantic exits, and dives off balconies.  Also two inept ladies of the evening and a 25-foot snake. The cast includes roles for 5 women and 3 men.

The action occurs in one room in a convention hotel.  "Domina" and "Kitten," actually Ann Olsen and Shirley Peterson, are hoping to meet an unknown investor so they can retire from their temporary stint in the "personal entertainment industry" and open a bakery in Mason City, IA.  Jerry Stockbridge hopes his speech at the tool convention will boost the sliding finances of StoneTuff Tools.  Jerry's wife, Emily, encounters the bakery investor and mistakes him for a pervert when he boasts about his pumpernickel.  Jerry's secretary, dowdy Miss Finster, visits the Ultimate Glamour Salon and Spa in the hotel concourse and ends up looking as though she is also in the personal entertainment business.  Jerry's boss, Mr. Stone, is delighted to meet Domina, Kitten, and the now-transformed Miss Finster.  Mrs. Stone takes time from searching for her philandering husband to visit the Ultimate Glamour Salon, and she, too, ends up looking like she's in the personal entertainment industry.  As in all farces, fast action and mistaken identities drive this plot.  The play ends happily with Domina and Kitten finally meeting their investor, Jerry's speech generating tool clients, Miss Finster back to normal and Mr. Stone wildly happy with Mrs. Stone's new look.  The script stays in the realm of sassy and does not contain any raw situations or offensive language.

Want to help with the show? Just email statetheatre@zaac.org and we'll keep you in the production loop.

Get your tickets for the last three performances of Forever Plaid staged at the State Theatre this weekend by Z-Theatre Community Theatre. Tickets are available at Busby's, Main Street Pharmacy, Crossings or at the door the day of the performance. You can also get tickets by contacting Dick Whitaker at 507-732-7361. Tickets are $10.  Performances are at 7 pm this Friday, September 7, and Saturday, September 8, with a 2 pm matinee on Sunday, September 9. 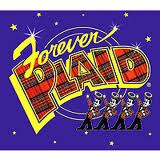 You will be rolling in the aisles over the playful antics of the Plaids as they attempt to reclaim their lost chance at musical fame. Featuring local actors: Luke Davidson, Rob Weber, Aaron Schumacher and Brian Adams. Directed by Lori Rauen and JC Koepsell. Presented by Z-Theater and ZAAC.

Z-Theatre Community Theatre is holding auditions for this fall’s production of “Forever Plaid” on Monday, June 25, at 7 p.m. at the State Theatre, 96 East 4th Street in Zumbrota.